Who are the Ladies?

I’m asked quite often about the ladies I photograph so I thought you might be interested if I gave you a bit of background information on some of them. You will realise for obvious reasons that I can’t/won’t give you full details but what I say about them will be true.

Lets start with one of my own favourites Michaella, working in health care by profession.

She was introduced to me by Sara who had met her at some do in the local county town. They had hit it off straight away and Sara being Sara started flashing at the event much to Michaella’s and her husbands astonishment. (Michaella actually wondered if it was a sort of candid camera stunt) but it was obviously a turn on for her so she very happily joined in! 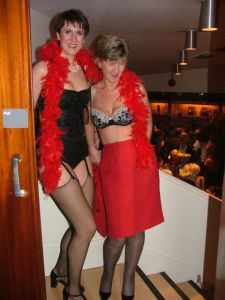 Sara encouraged her to do some modelling and we set up a shoot at her house. I hadn’t seen any photos of her so did not know what to expect but was highly delighted when she opened the front door to me in her underwear, wearing a white slip over white bra and knickers.

We sat and discussed what she was prepared to do, how far she would strip off etc over a coffee with her husband there as well. She said that she was prepared to go topless but did not want to strip off totally of do any open leg shots. I explained that the sets I had in  ind were more upskirt and this she was happy with. Indeed it was obvious as we got into the shot she found the whole idea of me lying on the floor looking straight up her skirt and poking my camera up there a great turn on and she admitted afterwards that she found it gave her a sense of power, looming over a helpless old man!

These were from her very first set,  you can see how relaxed she was!:

From then we did a number of shoots including video and she really did prove to be a natural in front of the camera and those tits of hers are to die for! Unfortunately it was a question of look but don’t touch!

As she got bolder I hoped that she would progress to some open leg shots and toys but the best I could do was to get her knickerless:

An added bonus of her being an amateur was that she was not shaved. I think its much sexier with a hairy pussy but most professional models will shave as thats what most photographers demand and its not something that can be varied day to day.

Unfortunately she decided to stop modelling a while back for a number of reasons.

I do miss her.

I hope you enjoyed this. If you did please let me know and I’ll do a whole series of them.

11 Responses to Who are the Ladies?